Zappos.com is an American online shoe and clothing retailer based in Las Vegas, Nevada, United States.[1] The company was founded in 1999 by Nick Swinmurn and launched under the domain name Shoesite.com. In July 2009, Amazon acquired Zappos in an all-stock deal worth around $1.2 billion at the time.[2][3][4][5] Amazon purchased all of the outstanding shares and warrants from Zappos for 10 million shares of Amazon’s common stock and provided $40 million in cash and restricted stock for the Zappos employees.[6] 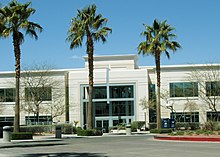 From 1999 to 2000, Zappos earned $1.6 million in gross sales.[9] In 2001, Zappos brought in $8.6 million, a significant increase from the previous year.[9] In 2004, Zappos reached $184 million in gross sales and received a $35 million investment from Sequoia Capital.[9][11] That same year, they moved their headquarters from San Francisco to Henderson, Nevada.[8] Over the next three years, Zappos doubled their annual revenues, hitting $840 million in gross sales. By 2007, the company expanded to include handbags, eyewear, clothing, watches, and kids’ merchandise.[12][13] In 2008, Zappos hit $1 billion in annual sales. One year later, they debuted at No. 23 on Fortune’s Top 100 Companies to Work For.[14][15] In the early 2000s, Zappos made the decision to move away from its original business model wherein the company does not manage any inventory. Hsieh noted, “Even though it was hard to walk away from sales at a time when nobody is offering you money, we couldn’t distinguish ourselves in the eyes of our customers if we weren’t going to control the entire experience. We had to give up the easy money, manage the inventory, and take the risk.”[16] In 2015 Forbes reported Zappos produces “in excess of $2 billion in revenues annually.”[17]